A Christmas nod to O'Henry 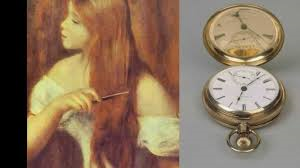 So do you have O'Henry moments?

One summer we spent a few days at Jackson Hole. In one of the shops there was a darling rotund Santa on the shelf. At the time we were collecting Father Christmas figures. I went back later to buy it and they said they'd just sold it. I gave a description of Mr. J. and they said yes, he was the one. I tried to act surprised Christmas morning.
Early in our marriage, I bought him a Helen Reddy album for Christmas (LP! if you can believe it). And he bought the same thing for me. Ditto for a John Denver album and a Victor Borge book (but the one Mr. J bought for me was SIGNED), and then, a couple of years ago, we each unknowingly bought a CD of Gentri (very good a capella group) for each other.
These coincidences (I don't believe in coincidences) did not involve any selling of watches or cutting of hair, (as in The Gift of the Maji by O'Henry), so there were no true sacrifices involved, but still, great memories.

I hope you make good memories this holiday.

Email ThisBlogThis!Share to TwitterShare to FacebookShare to Pinterest
Labels: Christmas, Christmas memories, coincidences, gifts, O'Henry, The Gift of the Magi