X-Rays and Chest Tubes and Blebs, Oh, My! 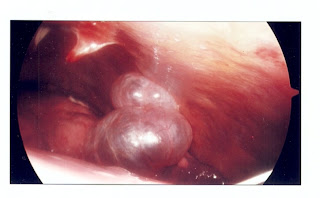 These balloon-like objects are blebs, which are air-filled blisters on the surface of the lungs. A bleb can rupture at any time and cause a pneumothorax, which is a collapsed lung. 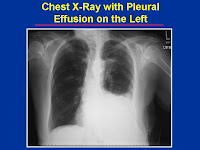 A collapsed lung is dangerous and very painful. One day in January 2013 I checked in to the local ER with chest pains and shortness of breath, and a chest x-ray revealed a "huge" pneumothorax,
which looked something like the x-ray above. 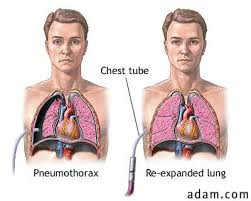 I was soon given my very own chest tube, which I wouldn't wish on my worst enemy.
Not that I didn't think about it . . . but, nope.

The other end of the tube is attached to a pump which gradually removes the "leaked" air from the chest cavity and allows the lung to inflate again. The tube was removed on the third day ("think of starting a lawnmower," the surgeon said about the removal procedure), and I was discharged. A week later I was pronounced "good to go" by the surgeon, who said no scuba diving or airplane travel for several months. And I had to stop smoking. No problem, as I never started.

I had convinced myself I was fine and wouldn't break again, but on a sunny April day, it happened again. This time I was transported by ambulance to a larger city where we were met by a cardiothoracic surgeon. Mercifully, I was put under general anesthesia. Through several small incisions, cameras and other instruments were inserted. Numerous blebs were discovered and excised, and the resulting wounds on the lungs were closed with small staples. Yep, I've got permanent staples in my lung and nope, they don't set off metal detectors. I also woke up with two chest tubes. After I was discharged, I was on oxygen for 3 weeks, tethered to a condenser with a thirty-foot tube.

Recovery from this procedure is a long and painful process and hasn't been without its glitches.

A chest CT scan shows blebs on my right lung, too, big ones in bad places. It's likely to collapse at some point. Or not. There is probably an underlying condition causing this. More tests may give us answers but they won't provide a cure.

I am being followed by three specialists and I am so impressed with their knowledge and skill. I have confidence in them. My surgeon was excellent, too. What a blessing to receive such good care.

So if you haven't seen me for a while since January, in person or online, blame it on the blebs, the surgeries, and travel. I also completed three rounds of edits on my upcoming novel in May and June. Earlier this summer, I flew to El Paso with Darling Granddaughter #1 for six weeks, so she could visit her Daddy (I slept while she was at summer day camp). Mr. J and I  have just returned from eleven days in Finland, where #2 son lives with his wife and two children. I slept for the better part of 30 hours after we arrived home.

You can stay home and wait to break again, or move forward. I choose the latter.

And that, my friends, is my story of X-rays, Chest Tubes and Blebs, Oh, My!

Oh my! indeed. What an ordeal. But I agree--you've just got to go on with your life and one of these mornings you'll wake up feeling just fine.